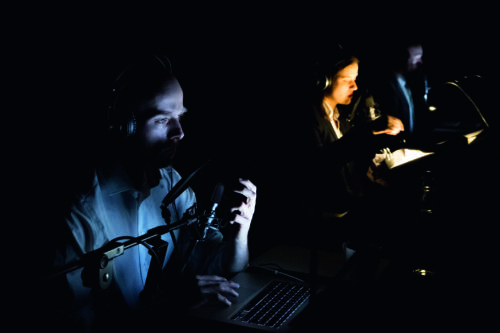 On Wednesday, 19th of April, the english-speaking group of Amnesty International Bochum invites you to „Ready for Boarding“, the world’s first theatrical adaption of the official senate report on the CIA torture program that was published in 2014.

The „Brachland Ensemble“, an independent group of performing artists and cultural workers from the fields of acting, performance art, dance and film, has designed and staged the play in cooperation with Amnesty International. The german premiere was celebrated on April 22, 2016 in Kassel. The english premiere will take place in Bochum on April 19 at 7pm in Kulturzentrum Bahnhof Langendreer. The play will be followed by a discussion session with members of Amnesty International and the ensemble.

How can there be a state-legitimized torture within a legal system and where does it begin? Can we rule out the torture program’s reactivation or maybe even an establishing on European soil?

Three professional speakers set to sound the stunning text with very few props, mainly using sound, light and voice. It is in parts rewritten as dialogues to translate the report of 600 pages into living but still incomprehensible situations. Breathtaking is not only the perfidy of the CIA’s system of imprisonment and torture, but the proceeding of a bureaucracy that failed when it mattered.

We also have to work sort of the dark side, if you will. We’re going to spend time in the shadows in the intelligence world. A lot of what needs to be done here will have to be done quietly, without any discussions.
— Dick Cheney, US vice president 2001 – 2009

In the end, even the CIA admitted that their “Detention and Interrogation Program” did not help at all to achieve the goal of making the US more safe. The Brachland emphasizes that the production is not about anti-americanism. They rather want to encourage an empathetic point of view. Given the fact that US-president Trump stated during his election campaign that he believes that torture works and that he might order troops to carry out waterboarding “and tougher” methods on terrorism suspects, this may become even more important. Also in Europe, after the attacks in Paris, Brussels, Nice, Würzburg etc., the production gains political relevance.

US-president Trump: “I have spoken with people at the highest level of intelligence and I asked them the question ‘Does it work? Does torture work?’ and the answer was ‘Yes, absolutely’. […] I want to do everything within the bounds of what you’re allowed to do legally, but do I feel it works? Absolutely I feel it works. As far as I am concerned, we have to fight fire with fire.”
— “Ready for Boarding” – Trump version

Working on the stage adaption it was made sure that the content and facts from the report remained unaltered. Three key points are playing a crucial role in the production: alienation, sensuality, social discourse.

alienation
Printed words are dead. The report mirrors a frankly perfidious bureaucratic way of thinking and use of language. Collateral damage is more “bearable” than the ragged family. “Enhanced interrogation” is easier to justify than torture. These means of presentation have an impact on civilians. So most of them are not able to comprehend the psychological finesse of some torture techniques. “Waterboarding” just creates an image of a bit water in the face. This kind of alienation plays a crucial part in the concept of the interrogation technique developers. The production breaks this alienation open and makes its system visible to the audience.

sensuality
The method of alienation deprives the well-deserved attention from the psychological torture. But: fantasy is the meanest torturer. Like there was one prisoner who was told, they’d bring soon his mother to the neighbor cell to rape her. He was told to listen carefully. Then light was turned off in his cell. After three days he started to injure himself. Instead of bringing realistic methods of torture on stage, the rehearsals were used to find means to activate the audience’s fantasy and to lead to an empathetic understanding, intellectually and emotionally.

social discourse
After publishing the report the public debate subsided rather quickly. In times where people talk more often about upholding our values, but at the same time these values are “de-valued” and the word humanity becomes questionable, “Ready for Boarding” is supposed to contribute to a culture of thought and speech that promotes freedom. It was made sure not to feed an anti-americanism, but to uncover systems and structures and to activate a sense of justice within the audience so it can draw its own conclusions. Recently a study said, especially younger people had a fatalism regarding political changes. Not least for them for them the production wants to offer a little oasis of confidence. For the evening’s conclusion is: The legal system can work, if, by the initiative of every single person, our core values are defended everyday anew.

When we see the consequences of a dramatic event like terror attacks, we can only hope that our performance moves people to be calmer when they take initiatives, and perceive their strength and power as citizens. We will have to ask ourselves what kind of society we want to be. How to we deal with our so-called enemies? This report gives a possible answer to those questions.

— Feature about “Ready for Boarding” (with english subtitles)

“The CIA torture report includes more than 6500 pages, the published part about 550 pages, but the live audio play “Ready for Boarding” accomplishes to convey it all in 80 minutes – and much more vivid than reading of the 550 pages would achieve. I can say this, me, who has read the report and experienced the live audio play: It is indeed an impressive experience.”
— Dr. Stephan Dewald, attorney-at-law and Amnesty International’s district speaker for Göttingen/Kassel