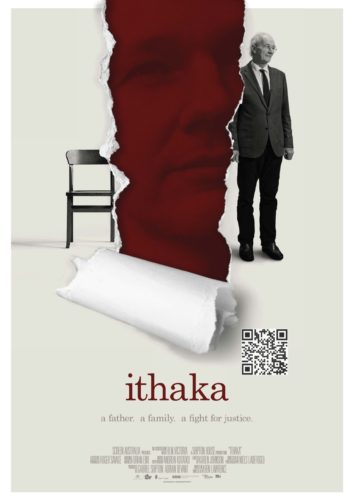 We invite you to a screening of the documentary “Ithaka | A father. A family. A fight for justice.” about the fight for freedom for Julian Assange. After the movie, a Q & A session with the producer Adrian Devant will take place. The film will be shown in english with german subtitles; the discussion will be in English.

Ithaka shines a light into the darkest corners of society, highlighting what the most powerful nations will do in order to hide their crimes. Stand up for global press freedom and your right to know as we fight for Julian Assange.

Producer Adrian Devant is the brother of Stella Morris, wife of Julian Assange.

A moving and intimate portrayal of one father’s fight to save his son, Ithaka exposes the brutal realities of the campaign to free Julian Assange.

The world’s most famous political prisoner, WikiLeaks founder Julian Assange, has become an emblem of an international arm wrestle over freedom of journalism, government corruption and unpunished war crimes.

Now with Julian facing a 175-year sentence if extradited to the US, his family members are confronting the prospect of losing Julian forever to the abyss of the US justice system. This David-and-Goliath struggle is personal – and, with Julian’s health declining in a British maximum-security prison, the clock is ticking.

Now it’s up to Julian’s father, John Shipton, and fiancé Stella Moris, to join forces to advocate for Julian on this international odyssey. As they rally a world-wide network of supporters and politicians, they cautiously step into the media’s glare – and are forced to confront the events that made Julian a global flashpoint.