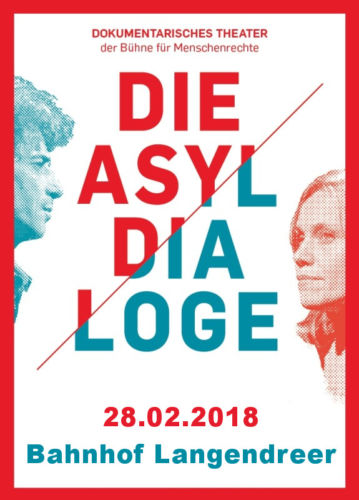 The ASYLUM DIALOGUES speak about encounters which change people, about joint fights in unexpected moments. One of the stories is set in Osnabrück, where since March 2014, 37 deportations have been prevented by a solidly united group of people. We hear these stories first hand, from the perspective of two young activists who are forced to play a cat-and-mouse-game with the police. The story confronts us with the question how much courage we can develop when activists turn into close friends.

The Asylum Dialogues were developed through detailed interviews, only shortened without linguistic changes: documentary, verbatim theatre. It is as if the acting ensemble speaks directly to the audience, reaches their hands and draws them into a new world: entangled, connected, linked with the heroes of the Asylum Dialogues. It is already the second production of Actors for Human Rights Germany after the success of the ASYLUM MONOLOGUES.

In cooperation with Kulturzentrum Bahnhof Langendreer; aided by LAG Soziokultur NRW as part of the “Talk back” series.