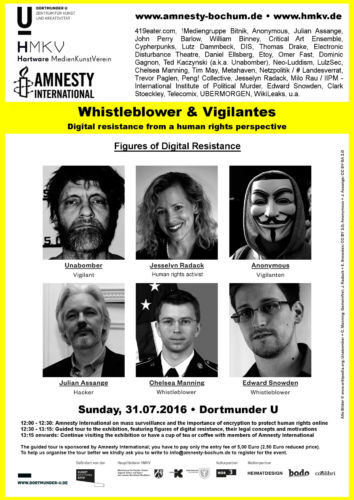 On Sunday, August 31 Amnesty International and Hartware MedienKunstVerein (HKMV) invite you to the exhibition „Whistleblower & Vigilanten. Figures of Digital Resistance“

The guided tour is sponsored by Amnesty International; you have to pay only the entry fee of 5,00 Euro (2,50 Euro reduced price). To help us organise the tour better we encourage you to write to info@amnesty-bochum.de to register for the event. The internet is perceived as a place that gives you the biggest possible opportunity to communicate and express your opinion on the one hand, but allows a maximum of surveillance and loss of privacy on the other hand. Following the revelations by Edward Snowden on mass surveillance, Amnesty International started to monitor recent developments in digital communication and information technology from a human rights perspective. Amnesty’s reports highlighted an increasingly invasive nature of governmental interventions to digital human rights as well as an increasing threat to privacy from the private sector.

In March 2016 Amnesty published the report „Encryption: A Matter of Human Rights“ that clearly defines encryption as an enabler of the rights to privacy, freedom of expression, information and other human rights. In simple terms „Encryption“ ensures that data is accessible only to the intended recipient. Many governments put in place legal measures to prevent or restrict the ability of individuals to use encryption, or to weaken it by forcing companies to provide a ‘backdoor’ which gives the government access to personal data.

Encryption is a technology that allows us to protect ourselves from violations of our right to privacy by governments as well as from criminals trying to steal our identity. It is a particularly critical tool for human rights defenders, activists and journalists, all of whom rely on it with increasing frequency to protect their security and that of others against unlawful surveillance. Instead of blocking encryption, Amnesty International is calling on governments to actively promote and protect online communications and at the same time calling on companies to provide an adequate level of protection of personal data.

Encryption and other methods for safeguarding one’s identity are also critical tools for several of the figures appearing in the exhibition. For example, the publication of the „Collateral Murder“ video by Wikileaks showing the killing of innocent people in Baghdad during an US army operation required encryption to protect the source. The focus of the exhibition lies not so much on the tools and technologies but on the motivation, legal concepts and strategies of self-legitimisation that drive hacktivists, whistleblowers and (Internet) vigilantes. What is the legal understanding of these different actors? Do they share certain conceptions? Who speaks and acts for whom and in the capacity of which (higher) law?

The event is organized by the english-speaking group of Amnesty International in Bochum in cooperation with the Hartware MedienKunstVerein that curates the exhibition.